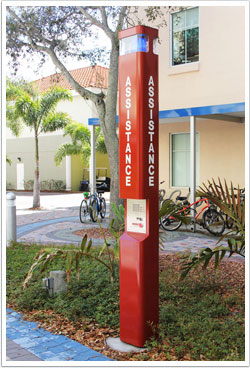 Like the students at Ringling College of Art and Design, Richard Tubbs, the college’s Director of Public Safety, wanted to address safety and security in a creative way.

Already installed across the campus were antiquated solar powered radio emergency phones. Rusting and providing little help to anyone, Mr. Tubbs brought in an outside security consultant to find an upgrade for the units.

“His main suggestion was for us to upgrade with Talkaphone.” said Mr. Tubbs. “We decided to go with their wireless voice over IP units. We initially had some questions, but the people at Talkaphone were always very helpful. The entire process was very positive.”

Talkaphone’s Blue Light Towers quickly sprouted up across the Ringling campus, but there was a glaring difference between these towers and others that you’d see at neighboring schools.

“When we purchased the units we made it a point to not have the “emergency” lettering on the side of the towers”, said Mr. Tubbs. “Instead, all of our units say “assistance”. We don’t use the towers strictly for emergencies. We use them as an all around communication tool.”

Mr. Tubbs and his department determined that the best way to create a safe and secure campus was to interact more with its students and surrounding community.

He wanted his department to be accessible to students in other ways, including, but not limited to emergencies. Talkaphone ended up being his gateway to that goal.

“In the towers we have two button phones,” said Mr. Tubbs. “One button says “emergency” and the other says “info”. We want to make sure that we help in all situations ranging from medical emergencies to flat tires. That’s how our department interacts with the community. That’s how we stay connected.”

The towers are nine feet tall and shine through day and night with Talkaphone’s new LED blue lights.

The towers also integrate with security cameras, which until now were lacking at the college. Additionally, each tower has a sightline to another, providing students with easily navigable alternatives.

The blue lights, in conjunction with the placement of the towers, create an identifiable boundary of Ringling’s campus.

“We wanted a deterrent to crime”, said Mr. Tubbs. “We believe that the blue lights are an effective crime deterrent. Their placement around campus not only alleviates the hearts and minds of our students, they create a positive environment for the surrounding neighborhood.”

According to Mr. Tubbs his department has received an abundance of positive responses from the neighborhood community with most highlighting the belief that the blue lights and towers are a deterrent to crime.

Talkaphone has helped Mr. Tubbs and his department cover communication voids on multiple levels. With Ringling’s public safety department more connected than ever to the community, Mr. Tubbs hopes that the student/officer interaction can become more commonplace. “We don’t want to be looked at as this “authoritative” figure,” said Mr. Tubbs. “We’re here to help.”

This article originally appeared in the June 2013 issue of the Security magazine, by Bill Zalud.