The Chabot-Las Positas Community College District serves a large part of the San Francisco East Bay Area. The district runs two colleges: Chabot College in Hayward and Las Positas College in Livermore. The district serves nearly 25,000 students and employs nearly 2,000 administrators. In order to accommodate the growing number of staff and students, both Chabot College and Las Positas College have progressively added to their infrastructure in recent years. 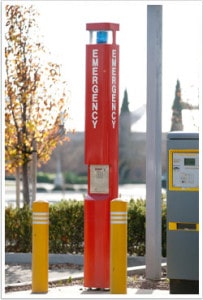 With these new expansion projects comes a challenging task of upgrading the college’s emergency communication and response systems. After the tragic events at Virginia Tech it has been a priority of many educational institutions to provide multiple means of communication with their students, especially for new structural additions to a campus.

Chabot College and Las Positas College are operated separately from each other. They each have their own administrators and staff, specifically their public safety representatives and officers. Both colleges were looking to update and expand their current public safety communication solutions, and both came to a decision to install Talkaphone’s emergency phones, mass notification towers and software throughout each campus.

Chabot College wanted to install a product that could provide a communication tool for both their students and police officers. Chabot’s 94 acres of land are in the center of the Hayward suburban community and heavy pedestrian traffic navigates through and around the campus daily.

Chabot College’s Nathan Moore, the Emergency Preparedness Liaison for Chabot College, elaborated on their choice, “The main objective of the college was to improve communications in and around campus. We made the switch to Talkaphone because we wanted a system that could allow us to broadcast messages from our call center and also broadcast messages spoken directly through the units with a microphone in the back.”

Chabot College has installed Talkaphone emergency phones throughout the campus parking lots and recreational areas with heavy student traffic. The installation included blue light towers as well as smaller pedestal mounts equipped with Talkaphone’s WEBS mass notification speakers. Not only do these units allow students to instantly connect with the Chabot security in case of an emergency, they also allow the Chabot security to reach out to the entire campus community using the WEBS Contact mass notification platform.

Taking into consideration the long history of earthquakes and wildfires in California, it was a no brainer for Nathan Moore and the rest of the Chabot College Police to choose these devices as a key communication tool during an emergency. Nathan Moore elaborated, “We wanted a system that could help us better organize our response and communication with the community. These units have done just that. These units help let the community know what’s going on during a drill or actual emergency. We wanted to create a safe environment.”

All units were painted bright red with an all-LED blue light on the top. The units can be seen throughout the entire campus and are easily identifiable. According to Nathan Moore, the blue light towers have a strong presence on campus, “At night the strobe lights have actually helped us locate people during emergencies.”

One of the key features of the blue light emergency tower is that it allows easy integration of audio broadcasting, emergency communication, and video surveillance. The system is extremely flexible and allows security authorities to broadcast intelligent live and pre-recorded messages through individual units or multiple zones. During the planning phase it became apparent that the emergency phone tower would allow Chabot security to use mass notification, individual response, and video surveillance capabilities in one cohesive tool.

The presence of new units has positively affected everyone on campus. One of the most vocal supporters of the towers is Leilani Guerrero, a Chabot College medical assistant and teacher. Ms. Guerrero has worked at Chabot College since 2006 and has watched the number of emergency phones grow throughout the years.

“I’ve seen them in action. Sometimes students will hit them if they have an emergency, a problem with parking, or something else”, recollected Miss Guerrero. “The college has done campus wide emergency drills with these units, for fire and earthquakes. They recently did a drill a few weeks ago. These units are in full force and they’re located all over campus. They’re quite loud and they really work! Everyone is so happy they’re here.”

While the new units are in full force at the Chabot College, the Las Positas Community College wanted to match its emergency communication capabilities with that of its sister school.

Recently, the college has received funding from a large bond measure to expand its infrastructure and improve facilities in and around the campus. With these funds, Las Positas Community College’s new Head of Campus Safety, Sean Prather, was given an opportunity to upgrade the college’s dated and impractical emergency communication network. It didn’t take Mr. Prather long to choose a new vendor, as he also selected to install Talkaphone equipment throughout the campus.

The new emergency wall mounts and towers are able to cover all areas of the 147-acre, 8,800 student campus. This coverage was achieved by placing an emergency wall mount or tower every 200+ feet. When arriving at the Las Positas Community College it is easy to see the security ring that these units provide. Students and the surrounding community know that the sight of a blue light emergency phone means the boundary or enforcement of the Las Positas public safety.

Mr. Prather elaborated on the placement of the Talkaphone units, “We wanted them within eyesight, about every 200 feet. We wanted them spread all over the parking lots where people tend to be a little more isolated as opposed to being in the interior of the campus.”

The new units have been extremely reliable, easy to learn and operate for both students and officers. Mr. Prather added, “We’ve had the Talkaphones for about three years. We used to get false alarms with our older products, but with the Talkaphones we’ve never experienced any problems. They’re really easy for the officers to use and they’re easily identifiable to the students.”

Once an emergency wall mount or a tower is activated, it is key that both the individual who activated a phone and the campus security have clear and undisrupted communication with each other. The problem with other emergency communication units was that the individual placing a call would have to press and hold a button to talk. This limitation posed a risk due to the fact that in most emergencies it’s not realistic for an individual to continue to press a button every time they need to communicate. The installation of new units fixed this problem as an individual only has to press the emergency button once to have continuous communication.

Additionally, Mr. Prather has been able to integrate all Talkaphone units with the college’s camera and access control systems. Mr. Prather mentioned additional integration capabilities in regards to his officer’s radios, “When a unit is activated a signal is sent to every officer’s radio. The nearest officer can then respond to the activation. Talkaphone perks like these have allowed us to drastically reduce our response time.”

The new emergency phones also fit other existing mounts on campus, which are being phased out. This capability has allowed Mr. Prather and the college to save money by maintaining old and outdated units through integration with new Talkaphone parts and units.

The new emergency phone towers installed at the Las Positas Community College offer multiple means of mass notification. Each tower can deliver mass notification through speakers, allowing security officers to notify entire or individual locations on campus. A microphone is included in the back of each tower allowing an individual officer to make on the fly messages through the tower loudspeaker.

Mr. Prather summed up his experience, “I really enjoy being able to use the microphone and using it for mass notification. For example, there’s a soccer field not too far from this location and if I needed to evacuate the soccer field I could go to a nearby tower and use the microphone in the back of the unit. This gives us another mass notification delivery option.”

Overall, the installation of Talkaphone emergency communication and mass notification equipment has been a great success for both the Chabot College and the Las Positas Community College. With the need to connect with more students every year the district has made it clear that communication is an essential tool in district’s growth.

The emergency phone units allow for better communication between students and campus security officers. Mr. Prather concluded, “I’ve heard nothing but good feedback from the campus community. I think they’ve been a huge benefit to our campus.” Nathan Moore added, “Talkaphone has been very beneficial to our college campus. There’s definitely room for more and we’re happy that they show the community that we’re looking out for their welfare.”

This article originally appeared in the July 2012 issue of the Security Products magazine.