With inclusion of the Mass Notification technology in the NFPA72: National Fire Alarm and Signaling Code, 2010 edition, it became clear that Mass Notification went mainstream. Now more then ever it is important to understand the strengths and weaknesses of each notification medium. Which ultimately leads to the question: how many notification layers should be utilized to adequately inform the entire population at hand?

The new NFPA 72 Chapter 24 is entitled Emergency Communications Systems (ECS). For the first time, the NFPA Code itself is dealing with issues of Mass Notification Systems, their design, installation and use, as well as their relationship with Fire Alarm Systems, which has historically been the main concern of NFPA.

NFPA also for the first time begins to deal with the issue of intelligibility of voice messaging, rather than just loudness. See for example:

• Section 24.3.1: “Designers and installers should understand the importance of a good distribution of speakers rather than a higher power output of a few speakers.”
• Section A24.3.1: In certain situations, it is important to provide a distributed sound level with minimal sound intensity variations to achieve an intelligible voice message. This differs from past fire alarm design practice that used fewer notification appliances, but with each having greater sound pressure output levels.
• Also see Annex D, Speech Intelligibility. Although it clearly states, “This annex is not a part of the requirements of this NFPA document but is included for information purposes only”, it is rather informative and may points a way to future Code changes.

NFPA allows the Fire Alarm system to be used for “Ancillary Functions”, as well as reversing the previous relationship between Fire Alarm Systems and Mass Notification Systems in the same building. Recognizing that having two audio messaging systems operating at the same time in the same area would make both unintelligible and virtually useless, in the past priority was always given to the Fire Alarm System. Now, however, depending on the risk analysis and under certain circumstances priority may well be given to the Mass Notification System, and in fact the Mass Notification system may not only silence Fire Alarm speakers, but even take them over for distribution of a more important message to be transmitted. 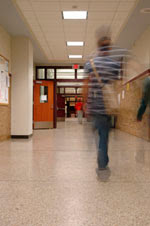 NFPA recognizes that a flexible, multi-layer integrated approach is desirable to deal with the complete Mass Notification issue. In addition, other aspects of communication are noted within this new Chapter. Ideally these elements, such as Area of Rescue and Elevator Emergency Communication, can also be included within this flexible, multi-layer integrated system.

While the new code clarifies many issues dialing with Mass Notification, there is one area that still remains unclear. Chapter 24 describes a product that can be confused with local area outdoor Mass Notification equipment, but in fact is very different in its philosophy of operation, function, and requirements.

We are all familiar with systems being described. As it clearly states, these are the systems that are activated to warn an entire town, or a section of a city, of an approaching tornado. These are the civil defense systems that we all became familiar with during the cold war, designed to provide a city with a warning of an impending attack.

Section 24.4.3.4.2 High Power Speaker Array (HPSA) describes the speakers used in such products, and the issues regarding their installation and use. Exhibits 24.10 and 24.12 show photos of typical High Power Speaker Arrays. They are mounted high up to transmit over the tops of trees and even buildings, to blanket a very large area with a common message. 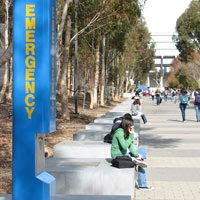 Talkaphone WEBS towers, on the other hand, are designed to provide a focused announcement to an outdoor area, and depending on topology and structures in the area, cover an area with as much as 1000 ft. radius. They can also be called in groups. This allows the broadcast of a different message to the quadrangle than outside to the dorms several blocks away. A campus giant voice system or civil defense warning system does not provide that specificity or granularity.

While there is a role for these massive announcement systems, they are quite different from a WEBS tower. The various concerns and requirements of Section 24.4.3 address those systems.

In this context it is worth noting that the U.S Department of Education released the Regulations for College Campuses Mass Notification Systems on October 29, 2009 (42 CFR Parts 600,668,675, et al.), stating that colleges must establish and release procedures that include:

“A description of the process that . . . (2) determines the appropriate segment or segments of the campus community to receive a notification . . ..” Such an appropriate segment, depending on circumstances, could be either a demographic or geographic segment of the community, furthering the concept of flexible layering of the Mass Notification System.

You can read more about the new Campus Security regulations from the U.S Department of Education in this blog post, or on our website.

. . .
This document is not intended to, and does not, constitute legal advice of any kind, and should not be relied upon as such. Readers are encouraged to contact their own counsel regarding such issues.

Copyright Talkaphone Co., 2009. This material may not be published, broadcast, rewritten or redistributed without prior permission.